…Start from the beginning.

Making pots at last it should have been. In truth it didn’t actually turn out quite like that. Indeed we were living within four stone walls and really it should have been time to move onto turning the former cowshed into my perfect pottery workshop. Finally knuckling down and throwing lots of pots. The reality though was somewhat different.

The workshop like the house had nice new doors and the leaking roof had been repaired. I must say it looked lovely from the outside. Inside though – fairly cavernous really, well you can see from the picture, kind of cow shed  just without the cows.

I continued to make pots throughout, all be it still in my temporary workshop. When I fired, I fired in my temporary kiln. Perhaps surprisingly we do get regular visitors to the pottery – come to visit the showroom I naively mentioned on my website several years back that I was soon to be opening. Of course there is still no showroom, but there is a warm welcome and a cup of tea, and there are usually plenty of pots to see too.

The upside to all of this is that working in a small space made me realise size isn’t everything. I had always had large workshops in the past such as the capacious Balls Pond Road workshop I have written about previously. It is true the former cowshed could make a massive pottery workshop. It probably would have if I had decided that it was to be my first job on arriving at Waun Hir.

Now the winters in 2009 and 2010 were particularly cold. We had temperatures of minus 17 degrees Celsius here at Waun Hir Pottery. It was the problems that I encountered trying to make pots in the extreme cold that got me to re-think my ideas about my new workshop. By now my website had started to have a fairly good presence on the internet. I had worked quite hard at link building and spent some money on search engine optimisation. I was beginning to sell regularly on-line and as previously remarked people were visiting us in person. As well as this I was getting enquiries from unconventional sources. By unconventional I mean companies and individuals you are not likely to meet at a craft fair or through any of the national pottery or craft associations. Many were instantly unsuitable and were looking for cheap and mass produced. One enquiry however echoed an opinion that I believe thankfully is being voiced more and more frequently; not everyone wants anonymous, mass produced, cheap and imported. Increasingly I think people are prepared to pay a bit more for British made, with provenance.

Tracklements are a company making condiments in Wiltshire and were celebrating their 40th Anniversary in 2010. They were looking for 500 commemorative mustard pots and wanted quality, handmade and British to complement their own speciality products. The reason I’m mentioning all of this is that I made the first batch of 100 pots between Christmas and New Year 2009. We went away for a couple of days during part of the big freeze – in brief the pots froze and I had to make them again! Subsequent batches were made by day and carried into the house and left on the kitchen table at night. Only to be removed again in the morning before my youngest (there’s three now) tried to mix them in with his Shreddies. Luckily these were only little mustard pots and while this was inconvenient it was perfectly feasible. One thing was for certain though, enough was enough, I desperately needed a decent workshop.

Read the next part… 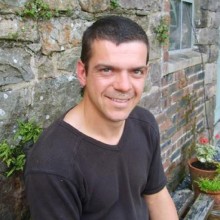